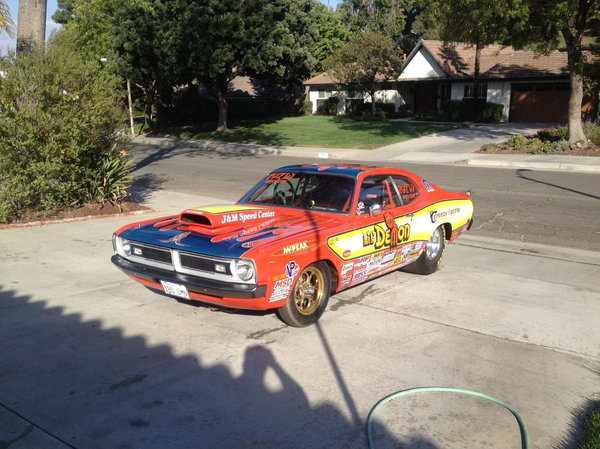 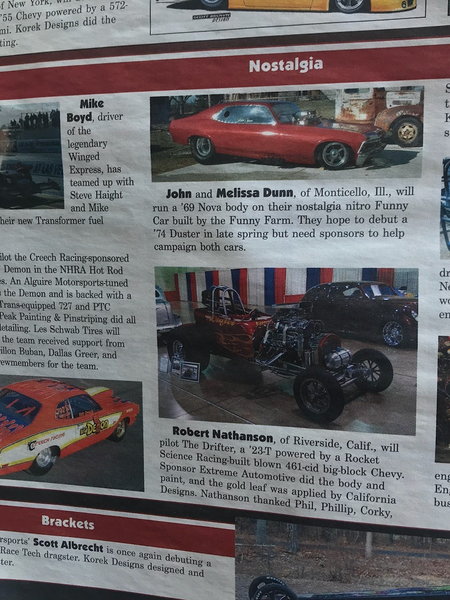 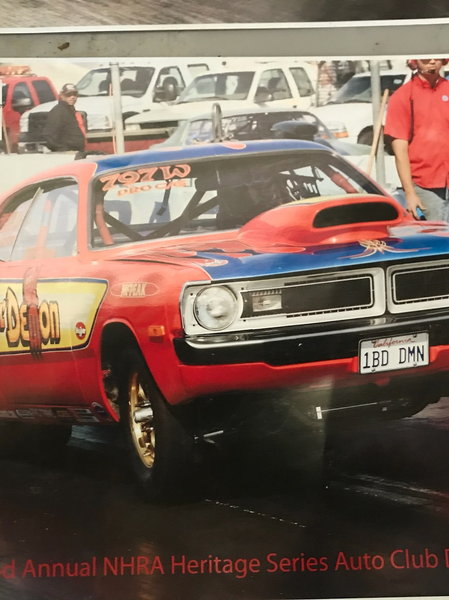 The story: Bill Creech grew up in Southern California and was privileged enough to have a hot rod / drag racing dad, be in the absolute pinnacle of nitro funny cars (the early 1970s), and live close enough to OCIR (Orange County International Raceway) at the time the super track of its day and host of the most badass funny car events you ever dreamed of – the Manufacturers Meet being the main one. 200 nitro funny cars on the property with 64 qualifying to represent their respective factory teams. This was the time of: Mongoose vs Snake, Jungle Jim vs The Snowman, the Lil’ Demon vs the Blue Max, The Revellution Demon vs The Chitown Hustler – it was a spectacle, it was an event, it sounded like you were going to a monster movie. And when you arrived and walked in the pits – you were not disappointed – insane paint jobs, wild characters, and loud cars. Add in the brand wars: Dodge vs Chevy, Ford vs Plymouth it became even more crazy and filled with excitement. Everyone was in and everyone went. To Bill– these are the critical missing components in drag racing today. Nobody cares about the Matco Tools funny car vs the Peak Antifreeze funny car, one bubble car vs another bubble car– boring – and fan attendance reflects it. None of those exist in drag racing anymore – it has gone corporate – and therefore bland and uninteresting. Racers have lost the plot as they are purely focused on winning – rather than understanding that without fans, there is no racing at all. With that in mind,Bill set out to create a car that would time warp people straight back to 1972. A loud car that shakes like a Southern California Earthquake, a name and character that make you want to see what it is, a paint-scheme that will keep your eyes glued to it, and burnouts that will make you think he is violating at least a dozen EPA regulations. Bill always loved the lines of the Dodge Demon. Add in that most people collect Dodges not race them, and add in that Demons were only produced for two years – combining that with one of my favorite cars – Pete Everett’s Lil’ Demon – and that became my target. Bill purchased the Demon in Ohio and brought it to California. he began getting it to be more of my style and once he was satisfied with how she ran, he contacted Bill Everett (Pete’s son) who enthusiastically gave Bill permission to use the Lil’ Demon namesake. Then he took her to Riverside California to Richard McPeak – one of the most well-known hot rod and race car graphics painters of the 70s – who just so happened to have painted his dad’s hot rod / race car (1970 Dodge Charger R/T “Magnum Force”). Taking his input of all of my favorite funny cars, Bill gave Richard a sketch of what he thought it should look like. He gave him a look, and told him to throw that away and just let him do his thing – he kept Bills pics of the original funny cars. A week later – Lil’ Demon rolled out of his paint booth in November 2007. Three days later – she was drawing massive amounts of attention at Infineon Raceway in Sonoma CA and the attention never left her. The only change I would make to the car would be to remove the modern contingency decals and replace them with 1971 decals (whether the parts are actually on the car or not).

Insurance
Allstate Insurance
Only Allstate offers Safe Driving Bonus Checks to you every six months you're accident free, Accident Forgiveness, which guarantees your rates won't go up because of an accident, and Claim Satisfaction Guarantee, guaranteeing that your claim experience will be fast, fair and hassle-free — or you'll get your money back, no questions asked. Allstate offers more than 15 Auto discounts to help you save.

Shipping
Thrifty Auto Shipping
If affordable auto shipping is what you're looking for, Thrifty Auto Shipping is the perfect car shipping & auto transport service to fulfill your needs. Whatever the job entails - business relocation, car dealership delivery, cross-country moves, etc. we make sure all vehicles are delivered when promised and in the exact condition as given to us. As one of the leading auto moving companies in the nation, we ensure the drivers we use are above all insured, reliable and their equipment is up to date. Once your vehicle is loaded it is covered with full coverage up to $80,000 dollars. This is peace of mind for you and your family. Rest assured our experienced drivers will transport your vehicle in the safest manner possible to prevent damage during transport... We also guarantee our clients will receive the highest quality of customer service, including professional and timely responses to all inquiries. Entrust the safety of your vehicle to Thrifty Auto Shipping, a family-owned auto transport company you can place your confidence in.

Storage
SpareFoot Storage
SpareFoot is the largest online marketplace for storage, making it easier to compare your options, find the best deals and prices and place a free online reservation, no credit card required. Self-storage facilities across the country have stepped up to meet the storage needs of car owners by offering safe, monitored space for you to keep your car. Whether you simply need a place to park it outside for a couple of weeks or are looking for a second garage to store your classic car, a self-storage facility near you may have exactly what you need.
View All Resources
Sponsored Ad
More items from: The Vault

Designated trademarks and brands are the property of their respective owners. Use of this Web site constitutes acceptance of the RacingJunk.com